QuadStandardLabs' lowKV offering of their first motor. A bit big for its class, but handles heat very well. 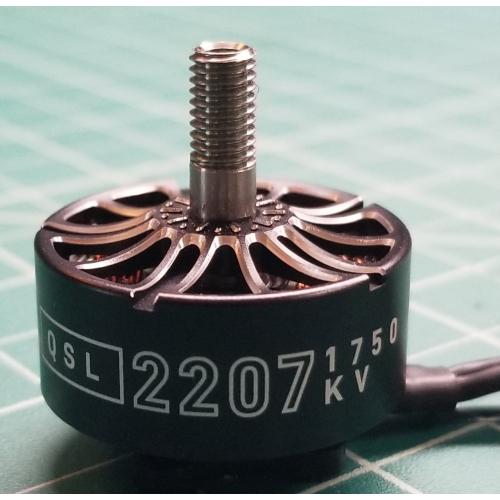 Quad Standard Labs is a relatively new company, seeking to provide complete solutions to clients.   They specialize in RTF cinematography builds, ducted 5" and the like.  This is the 1750kv version of their first motor offering, appropriately named "Cinematic."

Compared to the racing motors we're used to testing, the cinematic is taller (20.4mm compared to the ~18.4 mm of other 2207 and 2207.5 motors from Pyro, BrotherHobby, and RcinPower).  It's also on the heavier end of the spectrum for its size group.  Measured stator height is 7.4mm, which is within range for the size group.  Magnets are 8mm tall as measured.  Taller magnets have a fairly significant impact on torque production over magnets that directly match the stator height. This may be why the relatively lower KV motor tested similarly to motors in the higher KV class.  Measuring the magnets isn't exact, but they were taller than the 2207+ I had sitting next to this one.

One potential benefit of the larger motor is its increased ability to deal with heat.  On the thrust stand, all motors will heat up above 50% throttle, enough to affect their thrust performance.   This effect can be seen as the thrust and current draw decrease over the 2 second holds at 75% and 100% throttle.  Cinematic degraded significantly less than other motors we've seen.

Looking at the charts below, we compare the Cinematic (in red) to the RCInpower GTSV2 2207+ 1875 kv (in blue).  At 50% throttle, the GTS produces ~20 g more thrust than the QSL.  The current draw is slightly higher, so efficiency is roughtly the same between the two motors.    At full throttle, the GTS initially produces more thrust, but it falls off much more quickly than the QSL.  After the first half second of the 2 second hold, the QSL is actually producing more thrust than the GTS.  Current is the same between the 2 motors, so the QSL is getting more efficient than the GTS over the course of the 2 second run.  Please keep in mind that airflow / cooling, and current draw on the thrust stand will not be the same on a real quad flying through the air, but the effect is interesting.

Three of the five motors in our test set ran slightly rough, likely due to the bearings.