This is the long awaited refresh of Emax's famous "Red Bottom" motors. Looks like the upgrade was worth waiting for! 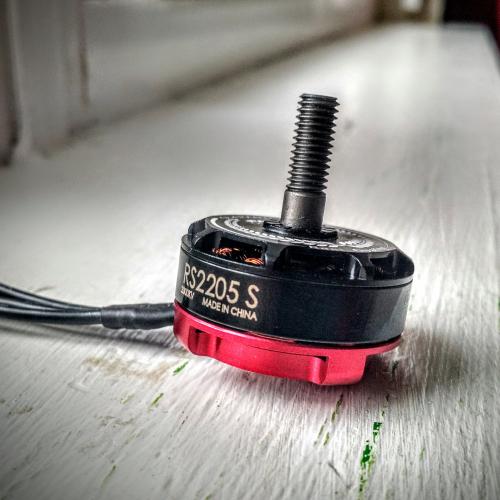 With the release of the original RS2205 2300kv motor, Emax totally redefined the mini-quad motor world.  The focus on performance and torque production on small motors totally shifted, and a new era of amazingly powerful motors was ushered in.  That effect rippled through essentially every major motor manufacturer.  While this next iteration of that famous motor doesn't quite do the same for the current industry, it is definitely a long awaited upgrade, and shows some significant improvements to the design.  The most notable improvements are centered around the shaft.  This motor has gone to a hollow shaft, single piece integrated prop adapter motor shaft that is held in place by a screw rather than a clip.  This version of the screw attachment design shows some improvements over some of the other implementations we've seen. The screw is a smaller diameter head, which puts most of the stress from attaching screw on the inner wall of the bearing.  This prevents an over-tightened screw from freezing the bearing. Also it seems that they have made the screw and the inner threads exactly the right length to allow no play, but disallow overtightening.   Asside from the shaft assembly, there are some other notable changes to the design.  The magnets have been switched from block magnets, to 1.75mm thick arc magnets.  The air-gap on these is one of the tightest I've ever seen, approximately 0.10mm, and the arc ensures the air gap stays constant along the whole passage of the magnet through the phase.  Also the base of the motor and the bell have both been minimalized as much as possible to reduce weight, shaving nearly 2g from the motor, bringing the total weight down to about 28g.  While that is still a bit heavier than I'd like to see for a 2205 motor, given the design of the cooling fins in the RS series of motors, there isn't really a way to shave any additional weight and still keep that functionality and maintian enough physical strength.  Overall the build quality on these is extremely impressive.

UPDATE 10/25/16: I finally got in the final production version of the RS-S motors in, and was able to re-run the sequence.  The results above have been updated, so be sure to check them out. If you want to compare the results with the old version, you can check out the graphs in the data explorer.  The new version had some small upgrades that made a fairly significant difference in performance. The stators switched from 0.20mm laminations to 0.15mm laminations.   The end result is some fairly significant gains in RPM output under load (more thrust) with very little current gains.  The thrust increase ranged from 40g to almost 80 grams depending on the prop, showing the largest gains on the heavier props.  That fact is not surprising given the impact of the thinner but higher number of plates.  These changes put the RS-S motor at the top of the 2205 class, tying results with the Cobra Champion, but with faster response times, and beating out the production Tornado T1.

The results here are about what I expected based on the improvements to the design.  Both thrust and response times are significantly better than the old RS motor, though current draw has gone up at a matching rate.  On the 5x4x3 this motor peaked at over 1200g, and easily cleared 1400g on the 6x4, which matches it with some of the current top 2205 performers, such as the Cobra Champion and Tornado T1.  The real benefit here isn't necessarily just the thrust, but the significant response time increases due to the arc magnets and tight airgap will really change the flying experience with these.  As with the other top performers we've mentioned recently, this motor is getting response times equal to 2206 motors on lighter weight props like the 5x4x3. Again, while this motor doesn't raise the bar quite to the same degree that the original RS did, it definitely represents a significant improvement, and worthy upgrade.