Cobra is back in the game with this new release, a 2205 2300kv with pretty much everything upgraded. This motor was sent over by Innov8tive Designs for testing. 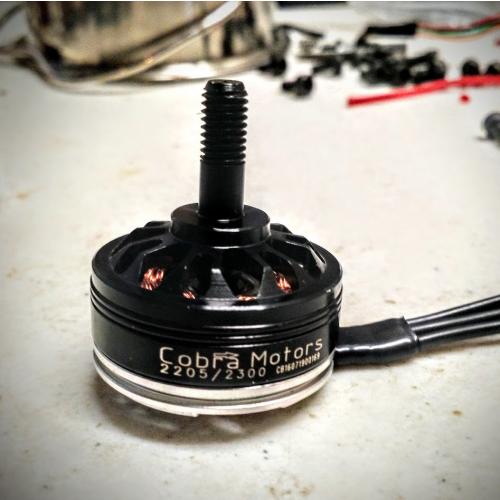 Cobra has a longer history than most of the motors that have been coming across the bench lately. The original Cobra 2205 2300kv was one of the first motors I tested, and for a very long time it set the standard for mini-quad motors.  It wasn't until the N52 revolution 6 months ago that the Cobra was able to really be supplanted.  This motor is Cobra manufacturer Pulso's somewhat belated response to that shift.  This new motor is made to the same standards that made Cobra famous years ago.  The build quality is fantastic, machining is excellent, and tolerances are very tight. My only real complaint about this motor is the weight.  At 29 grams it is significantly heavier than the 2205 series that it is replacing.  As a bonus this motor is actually properly labelled!  I am very pleased to see that they took the consumers seriously and made that change.  I opened the motor and confirmed the stator sizes are indeed accurate.  All the cosmetics aside though, the real question is how it performs!

When it comes to performance, Pulso definitely knows how to make a motor!  The performance on this motor rocks the charts once again.The stators are using 0.15mm laminations like the Tornado T1 series of motors, and as I pointed out previously the performance difference is fairly significant over the standard 0.20mm.  As with the T1 2205S, this motor is able to match the thrust and transition speeds of a decent 2206 on lighter props, while keeping the 2205 stator size.  The magnets are clearly at least on the level of the other N52s out there.  Given the performance here of non-arc fairly thin magnets, I actually wonder if they haven't found something a bit stronger.  The performance of this motor is that impressive!  I never thought I would see a 2205 motor that could sustain 1500 grams of thrust on a 6x4 yet here it is.  This motor was essentially made for the 5x4x3, where it has very fast transition speeds and amazing output.  It looses a bit of ground to the 2206 motors on the heavier 5" and light weight 6" props in terms of transition speeds, but it manages to hit similar RPMs even though it takes longer to get there.  The biggest downside continues to be the weight, which actually puts it into fairly direct competition with the similarly weighted 2206 motors. I would have preferred to see a similar weight to the original Cobra.  Overall, this motor seems to be one of the top performing 2205 motors on the marker, and even can keep competition against the 2206 motors depending on the prop choice.