The latest iteration of the BrotherHobby Returner line. 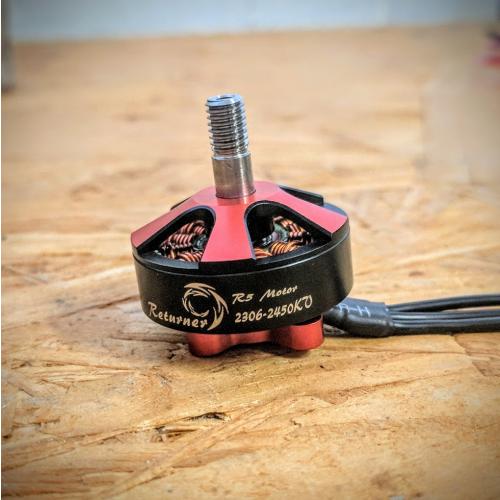 The BrotherHobby Returner series of motors are probably one of the most influecial and longest running of the modern mini-quad motors, spawning dozens of derivatives and OEMs.  The Returner R5 is the latest in this historied series, widening the R4 design out to 2306 and shaving some weight with the minimal base that has become so popular on the Returner-derived motors lately.  The two-tone anodization that has been the signature of the recent Returner motors is really striking in red and black. One important change to note with these motors is that they use a smaller bearing as part of the weight savings.  Rather than the 4x9x4 bearing typically used in motors with 4mm shafts, they use a 4x8x3. Don't confuse this with the 3x8x4 used in 3mm shaft motors, this is 4mm internal diameter, 8mm external, and 3mm tall, vs 3mm internal, 8mm external and 4mm tall used with the 3mm shafts.  This smaller ball size in the bearing is likely to sacrifice long term durablitity for weight. The weight savings do add up though, with this motor coming in at 29g on the nose, it manages to offer a fairly large stator in remarkably light package.

I was very curious to test this motor essentially back-to-back with the Multicopter Builders Primo 2450kv, given the similar vintage of the two motors. There has long been a debate over the differences between a wider stator and a taller stator and I was hoping to gain some insight here.  Fortunately the kV of these motors are quite close, about as close as you can expect two different motors to be.  The 2207 comes in a bit lower kV, so keep that in mind here.  The 2207 edged out the 2306 by a tiny bit even with the lower kV, but the results were extremely close. Given the similar construction and tolerances on these motors it's an interesting comaparison worth some time in the data explorer. The R5 is a strong performer in the mid kV range, combining good response and torque with a reasonably light weight.  In the R5, BrotherHobby continues to excel at balancing power and weight.