This is the newest release from ZMX, the first of the new Fusion line of motors. 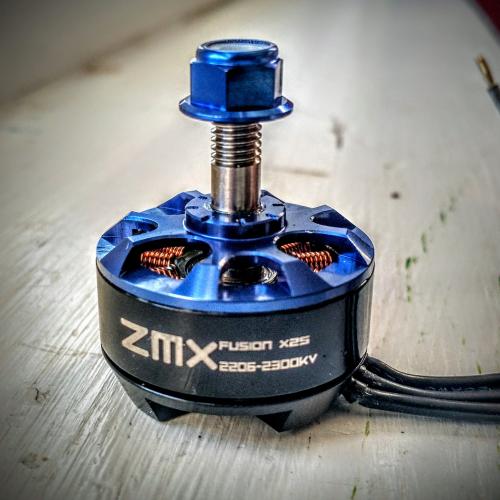 ZMX has been pushing the boundaries on motor performance since early in the wave of new "superpowers" we've seen coming down the pipe within the last year. Given their history of high performance motors, I was very curious to see what changes the latest motor would bring. I was expecting good things, and this motor did not fail to deliver. The build quality on these is stunning and offer some significant improvements over the previous v3 design. The motor is being made by a new manufacturing and assembly plant, and the quality increase is fairly dramatic. The CNC work is impeccable, and the motor is now entirely gloss, not just the magnet retaining ring. The motor shaft has been switched to a hollow shaft design, and uses a screw to hold the shaft in place from the bottom. The screw is a standard size screw and fits neatly over the inner collar of the bearing without touching any of the moving areas. The tolerances are extremely tight through the motor and the windings look excellent. This is definitely one of the most impressive motors to cross my bench. There is one small caveat here, I have to mention it because it impacted the test, but it is not the fault of the manufacturer. DHL lost my package in china, and during the time it was being "re-routed" it got pretty abused. It came to me in different packaging and the boxes the motors came in were pretty beat up. The motor still looked fine cosmetically, so I ran it anyway, but about 4 props in, it slipped a magnet. I was able to re-glue the magnet and finish the test, and it did not impact the results in any observable way. I'm very confident this was a result of the shipping and an isolated incident, as there have been no other reports of slipped magnets from the testers I have talked to or from the manufacturer themselves, and only one magnet slipped. I do not believe it is reflective on the quality of the motor. Overall I was extremely impressed with this motor, both in terms of build quality and aesthetics.

The results on this motor were absolutely stunning. The Tornado T2 tested earlier this week blew me away, and the Fusion X25 topped that pretty much across the board. There is one note on the KV test results here. The no-load tests appear to losing some accuracy as we get to stronger motors, with very strong magnets and the newer thinner stators. Both the T2 and the X25 have tested slightly higher KV than seems probably given their loading, and I am seeing a divergence between data collected via the generator KV method and the no-load KV method as we move to these stronger motors. The X25 in particular seems to have much larger divergence on this front, with the electrical KV method testing at 2320kv, and my no-load test putting it closer to 2400kv. Already the stronger magnets are starting to blur the lines between high KV and low KV, and it seems to be only getting harder to classify these. The results here reflect that. The lower electrical KV can be seen on this motor by the fact that the RPM loss as we move up in the prop loading spectrum decreases at a lower rate than the no-load KV would suggest. One of the things that struck me most about this motor was how much torque it was capable of producing on heavy props. Transition speeds were extremely fast, and even heavy props were handled with ease. Especially on the heavy props there were very clear gains over the previous generation of motors, not only in RPM output, but also transition times. At this point in my testing I have yet to see any other 2300kv motor perform at this level, though the Tornado T2 comes quite close. Essentially the performance comes very close to matching a high KV 2206 of the previous motor generation, but at significantly lower current draw. That being said, the high output of these motors definitely will push your batteries harder than most other 2300kv motors, but in comparison to the v3 2206 2600kv motor it is still coming close to the maximum physical output (within 80g thrust on the 5x4x3 and only 40g less on the 5x4.5x3HBN) at 5-8 amps less current. That is an impressive achievement by itself.