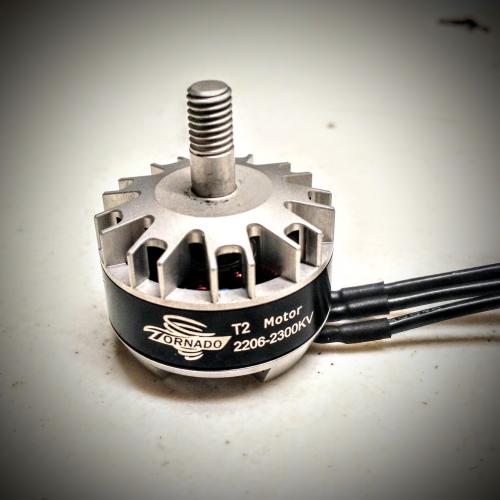 This is the final T2 version of the prototype T1 2206 2300kv motor I previously tested. The original prototype did extremely well, and I was very impressed with it, and this final version has made some improvements. The primary improvement is an internal 4mm hollow shaft. The specific implementation in this motor is a bit curious to me. The typical hollow shaft design in most motors involves a single machined piece of steel that makes up both the prop shaft and the interior motor shaft, tapering down after it goes through the bell. BrotherHobby chose rather to keep the exterior shaft the same aluminum design and simply change the interior shaft to the hollow design. This is similar to the approach that Airbot has traditionally taken on their old designs with the 5mm internal shaft and the external prop adapter. In this case it seems to be an attempt to bring the overall weight of the motor down, as it is also accompanied by a shortened external prop shaft, and an accompanying low profile nylock prop nut. Through the entire motor it appears that attempts have been made to lighten it where possible. The magnets are 1.8mm instead of 2mm, which showed essentially 0 difference in performance and possibly a slight improvement in the 2205 motor. The increased shaft size results in slightly larger bearings, which also results in a slightly smaller stator area. The decrease isn't significant to the performance of the motor though, and the gains of sturdier bearings is definitely worth it, as weaker bearings has traditionally been a drawback on the BrotherHobby motors. The build quality on the motor other than those changes is excellent, and identical to the original Tornado T1 motors. I'm not entirely thrilled with the changes, as I tend to dislike the low profile prop nuts, and some of the heavier props with taller hubs could have difficulties on the shorter shaft. In fact during testing I used a full height prop not and it definitely didn't reach the nylon insert on several of the props I was testing. I also would have preferred to see the standard full single piece shaft rather than the interior shaft only being upgraded. Overall though the motor is excellent quality, and the changes may make more sense for some pilots than others, depending on priorities.

This motor definitely lived up to the results from the prototype, matching it almost exactly across the board. On one or two props it seemed to fall behind the T1 prototype a tad, but almost across the board the numbers lined up very closely. It appears that the small differences are likely environmental, as there appears to have been some voltage variance between the runs. This motor is definitely one of the top 2206 motors I've tested so far, putting out some very impressive numbers, and not totally sucking the current like some of the higher KV performers out there. In fact on the 5x4x3 it matches the F60 2450kv in thrust at almost 3A less current on the top end, though the F60's higher KV definitely shows at the lower throttle levels. The T2 is going to have more dynamic range than the F60, but the F60 will have more control at the lower throttle. Still the T2 is almost 4 grams lighter per motor, so it is all a balance. It also loses ground quickly against the F60 on the heavier props, a full 100g loss at WOT on the 5x4.5x3HBN, and only going up from there. Overall the T2 is a very impressive 2206, creating a good balance of power, current usage, and weight.