This is a new motor for Lumenier, and when I say new, I mean new! This is like nothing I've ever seen from them before. 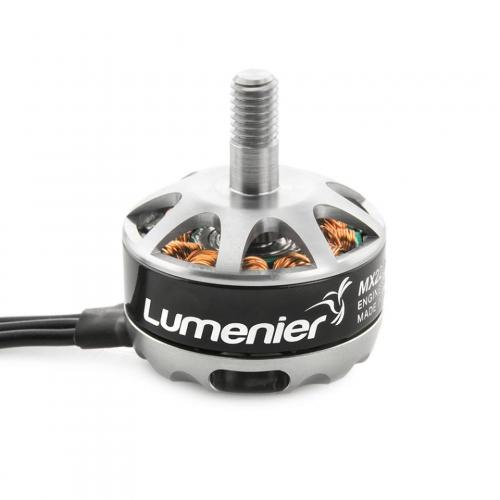 Lumenier has always produced some of the smoothest and lightest motors in their class, but has also long had a reputation of valuing smooth running and low top end current over power. I've reviewed several Lumenier motors and while the build quality, balance and smoothness was always excellent, power was often significantly behind the typical motors in their class. This motor has changed that in rather dramatic way. The build quality here is essentially the same as the existing RX2206 motor. The bell housing and physical design is essentially identical, what's changed is all on the inside. Essentially all the internal components that define the performance of the motor that have changed: magnet upgrades, air gap reductions, and stator improvements. The motor is still extremely smooth and very light, coming in just under 28g. This puts it in a weight class to compete with the Returner R3/R4 range of OEMs. Whether the performance updates are enough to break into that category is the only question that remains. So let’s check it out!

A quick note here, these existing test results are from a pre-production prototype.  Some small changes have been made to the visual design and magnets. I should have the final production version in for testing before long, and I will update the photo and results then, but they should only better!

Lumenier really nailed it with this motor. They finally committed to a light powerful motor over the lower peak current they always sought in the past, and man did it pay off. The numbers here are impressive, matching performance with some of top of the modern motor heap. Performance falls just short of the ZMX Fusion and Tornado T2, but not by a lot. Performance is almost identical to the Emax RS2205S and the Cobra Champion 2205 2300kv, which given the level of performance those motors have shown and the fact that the MX2206 is significantly lighter than the Cobra, and marginally lighter than the Emax, that puts it in a very competitive place. This level of torque production and performance does come at a cost though. Peak amp draw rises proportionately, but is no more than the other powerhouse motors in it's class. It is worth noting that low to mid throttle efficiency is actually quite good, on par with the previous generation RX2206 motor, it just happens to have significantly more top end. If you're a Lumenier fan, and have been waiting on a motor that could match power and torque with the recent powerhouses, this is the motor for you.