The Crush Light was designed on several core principles:

The primary concept I kept in mind when I started designing this frame was keeping the design and assembly as simple as possible. Complexity is the enemy and an easy snare for designers. I approached all the other design and functional elements of the frame through the lense of simplicy.  The frame consists of only 2 plates and 4 arms. No complex parts, no fancy aluminum, just carbon, screws, and a few standoffs.

One of the key reasons I began designing my own frame was to satisfy my desire for a frame that could take just about any hit and keep going, but was still light enough to be agile. My goal was to create the strongest frame I could without exceeding 110g dry weight (including all hardware but excluding the GoPro mount.)  The final version of the frame exceeded expectations on both fronts, being virtually indestructible and coming in at only 105g dry. Strength is achieved through 5mm thick arms that have 3 screws holding them in place at leverage points that give them tremendous strength. The arms thickness allows for a fairly narrow profile that retains strength while keeping weight and air resistance low. The arms on the 5" and 5.5" frames also use a 16x16 fixed motor mount pattern which contributes greatly to both strength and weight reduction, while the 6" and 7" arms use a larger 16x19 mount pattern for increased flexibility, but gain some wait to keep the strength and eliminate stress risers. Strength is retained in the rest of the frame through a 3mm thick main plate that absorbs much of the stress from impacts, 8 standoffs that distrbute the force from the top plate equally through the frame, a 2 mm thick top plate, and attention to detail in eliminating stress risers where possible from both the plates and arm designs.

The two former philosophies are perfected by the latter. The frame had to be both accessible and easy to use, easy to assemble, and easy to repair for the end user. It can be assembled in minutes and changing arms takes only seconds through the use of press nuts and keyhole design for the stack screws. Pre-set press nuts also mean no fuss for the end user, and much less work on both assembly and repair. The top plate has notches for battery straps in several locations to allow flexible battery placement, and there are zip tie anchor points throughout the frame for ease in building and repair. The top plate has a cutout for an SMA pigtail with zip tie locations both in front and behind the connector.  The frame also includes 12.9 steel hardware for mounting motors to the the thicker 5mm arms, given that most motors come with screws that are too short.  The frame can also be built with varying height standoffs to allow for a larger range of camera selections, though it ships with the 20mm standoffs that provide optimal CG and handling. Finally the simplicity of the design is met with a cost that makes the frame accessible to almost any pilot. 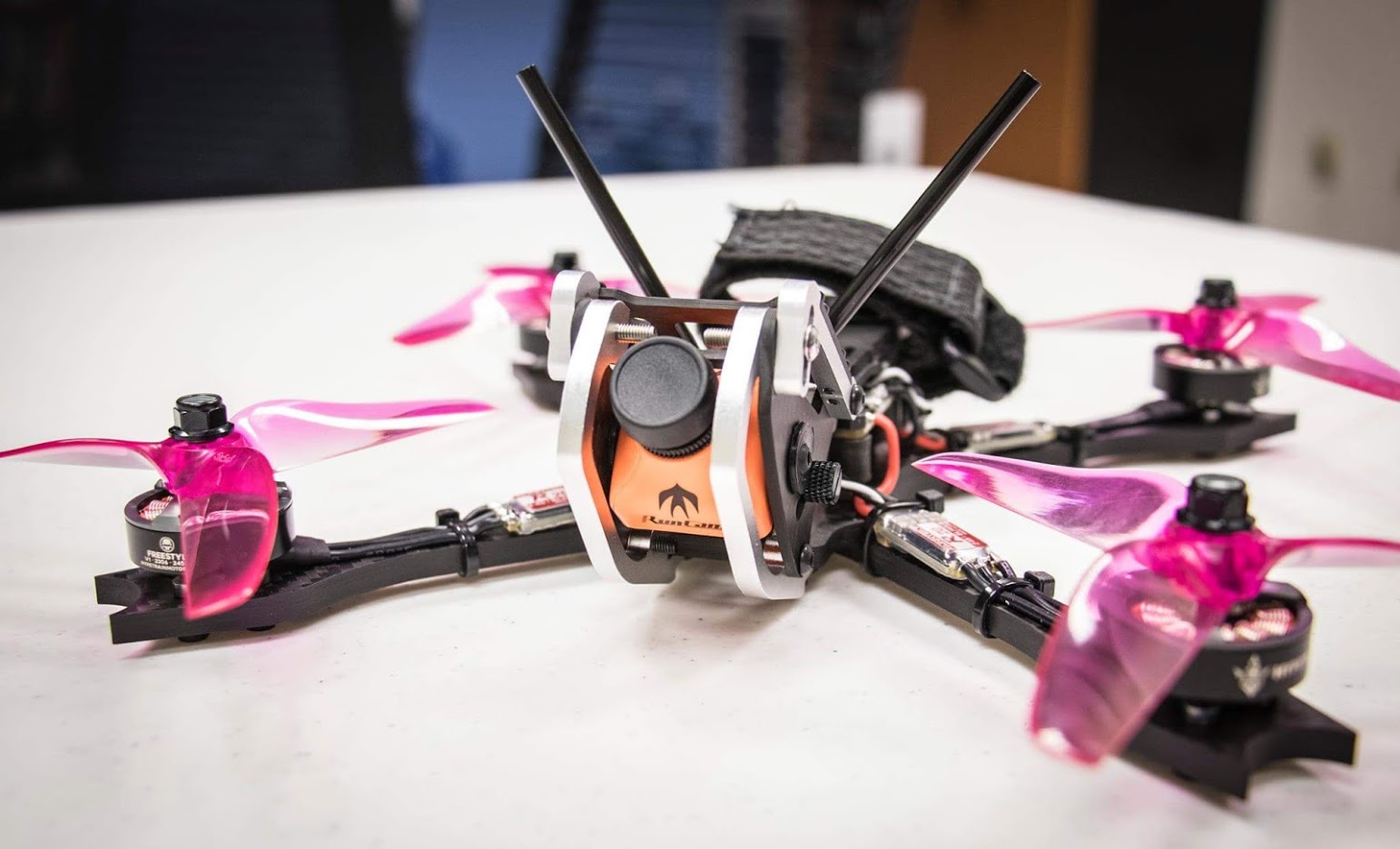 Almost a year ago I began looking for a new freestyle frame after being unsatisfied with the majority of the options on the market.  After some searching I realised there was nothing on the market that hit everything I wanted in a frame.  Many of the designs were overly complex, or used parts and techniques that drove up cost.  I started working in CAD to build something more in-line with my specific needs in a frame. My first love was the Armattan Chameleon. It flew better than just about anything at the time, but the arms were not as rigid as I hoped, and breaking one arm meant replacing a whole plate. The monoplate design of the Chameleon has inherent weaknesses from a structural perspective, but there were many things I liked about the Chameleon so I began my attempts as a modification with for the Chameleon and cut several prototypes through Armattan productions.  I created a replaceable arm modification and after playing around a bit, I settled on a true x layout for the arms.  In this instance with the mass arranged along the pitch axis, using a true x layout slows down the responsiveness on the pitch axis and keeps the roll axis very snappy, similar to the impact of a stretch X with a pod style frame.The design came out looking a bit like a turtle, and hence the Crush was born. After several months of working on this design I came to two realizations. Prototyping while waiting 6 weeks for cuts to arrive was unrealistic and having someone else cut my prototypes was time consuming and expensive. As a result did some research, I put asside some funds, and purchased a 6040 CNC to speed up the prototyping process. Around the same time I realized that relying on the parts and infrastructure to a current frame was limiting both in availability of parts and the longevity of the design. As a result I made changes to the design to allow it to stand on it's own and worked with Brain Philips of Brain3D to develop a standard session mount. I designed the frame to keep the CG centered as tightly as possible along both axes, creating a remarkably compact and agile freestyle frame. 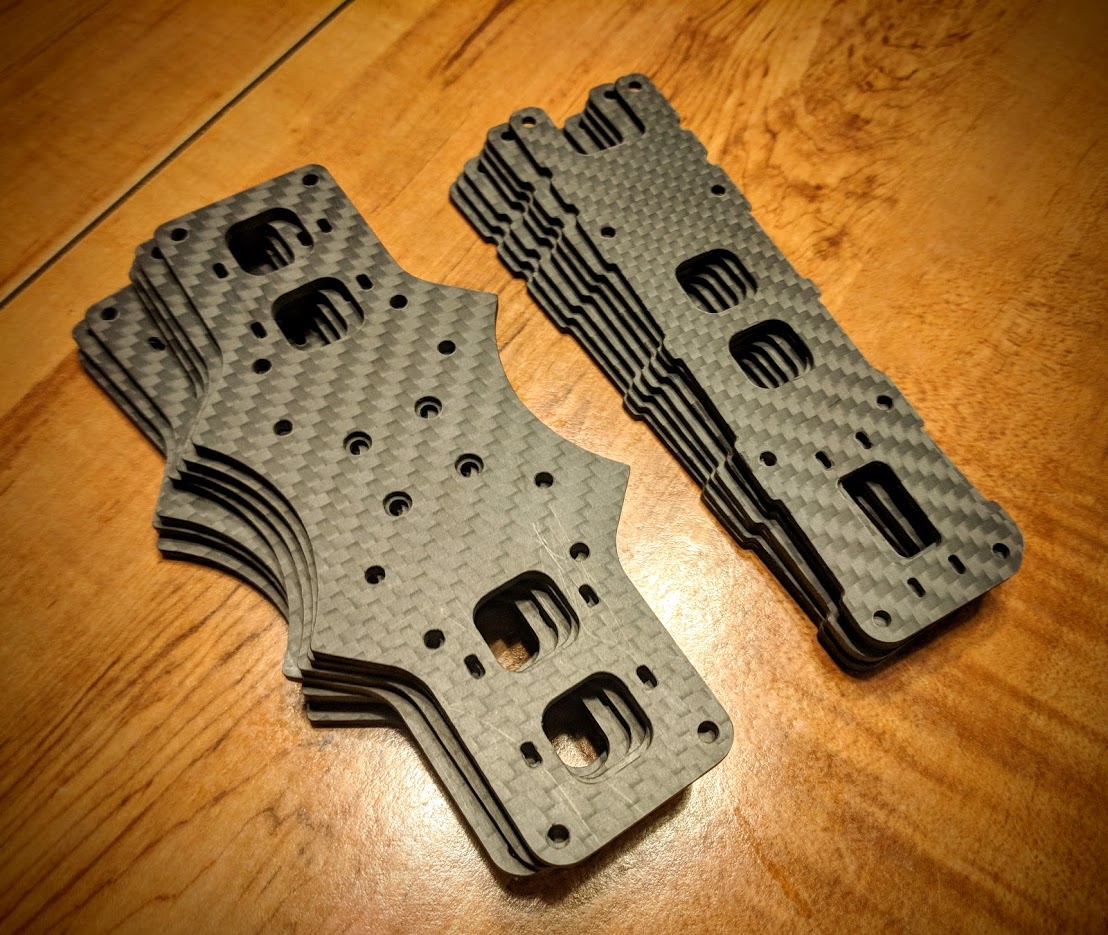 Early in 2017 I produced a small run of prototypes and began testing the design with a group of local pilots. The first batch went extremely well, and both durability and flight handling characterstics exceeded expectations.  Based on feedback from the local test pilots I made some small changes to the attachment of the arms to the frame, allowing the arms to be removed without disturbing the flight controller stack, and adding strength near the base of the arm.  I also made derivatives for pilots who prefer the "H" style frames, creating an "LP" or "Large Prop" variant that uses a 40 degree "H" style X. This moves the props further away from the center, clearing more of the camera view, and giving a more stable roll axis. The result is more symmetrical handling between roll and pitch and slightly less agressive handling.  It also allows for larger props with the same arm length and weight. With the recent rise of long range setups, a larger body to handle larger batteries and longer arms in 6" and 7" lengths were also developed.