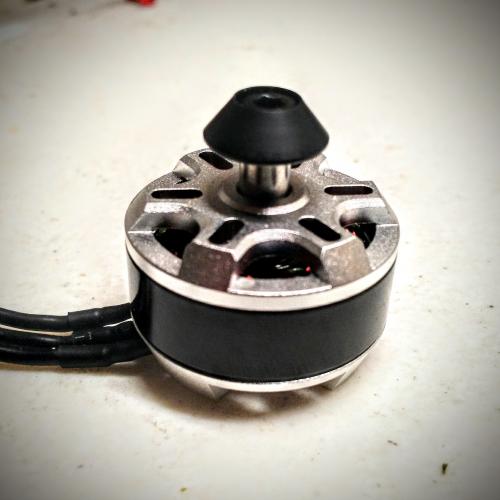 If you've glanced at the photo of this motor, you will immediately know what I meant when I said completely new! I was involved fairly early in the testing phases of this motor, and when I saw the initial prototypes I was immediately blown away.  It was a massive case of "why didn't I think of that!?"  and several others who've seen the prototypes had the same response.  If you're still not sure what I'm talking about take a close look at the top of the motor.  Rather than a traditional threaded shaft, this has a very short shaft of the same diameter as the standard single piece steel shaft designs, but only about 5mm tall.  Instead of the exterior thread, the shaft has an M3 interior thread, and the prop is held down by a standard M3 12.9 steel bolt and a washer.  This design is absolutely brilliant for a couple of reasons.  Primarily it allows the shaft to be much lighter, as it simply has much less area, and as a result less mass.  Second instead of aluminum lock nuts, we have heat treated, hardened steel against 12.9 steel on the threads.  This means they will be virtually impossible to strip, as well as much less likely to bind. I can attest to the fact that changing props was a good deal easier through the multiple changes of my test sequence than almost any other motor I've used. One potential downside is the specialized washer used to hold down the prop.  The motors will come with two washers each, and I'm sure Armattan will have buckets of extras.  Overall, though I think the shaft design is brilliant, and total win.

In addition to the top half of the shaft this motor does have some additional great features.  The bottom of the shaft is also held in place with a screw, as with several other motors on the market. The bell design is also unique, but appears to be mostly aesthetics, without any active cooling elements.  It is very nicely done though.  The core of the motor is based on the Tornado T2 design, and has all of the benefits of that, including the N52H magnets, very tight air gap, and 0.15mm stator laminations. The weight is very close to the T2 as well, coming right at 31g with stock wires and no prop bolt/washer. All that combines to make this one wicked motor!

One additional note, the photo that is posted right now is of the final prototype, but the production version will be colored.  I'll post up a new photo once I get in the production edition.

Given the roots of this motor in the Tornado T2, I expected some wicked performance, and I wasn't disappointed!  This motor is slightly lower KV than the T2, coming in at 2270kv vs the T2's 2360kv.  That has some interesting results when it comes to performance.  There is a slight reduction in thrust, but it so small as to be insignificant, however it comes with a reduction in current as well, which is not so insignificant.  Across the board the Armattan produced very similar thrust with 1-2A less current.  In fact on the heavier props, the Armattan actually out-performed the T2 at lower current, though still falling short of the ZMX Fusion (though just barely).  This motor essentially ties with the current top performing 2206 motors, while edging them out in terms of efficiency.