This is the fifth test in the 2300kv motor test series. This time it's the Emax RS2205 2300kv motor. This is motor was a sample sent to me by Emax for testing (Thanks!). As always, please give me any feedback on ways to improve it or make it the comparisons clearer.  Once I've done the full bank of motors, I'll do a document sumarizing the direct comparisons.

Now on to the stuff you really care about! 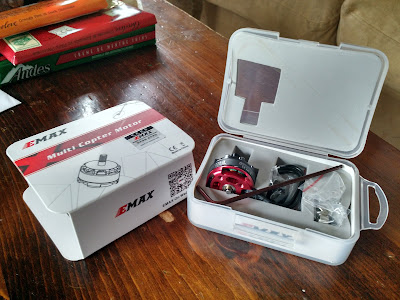 I've not had much experience with Emax motors, so I was a little unsure of what to expect with this one.  I've heard good things, so I was optimistic.  Build quality on this one was top notch.  Tolerances are actually tighter than any other motor I've tested so far.  Because of the design of the cooling series motors, there's a bit more metal in the bell and base weighing in at 30g, which results in a heavier motor, so this may not be ideal for some racers who need a lighter setup. My only real complaints about this motor were ones that will be addressed for final release.  The printing on the side of the bell was just a sticker that wrapped around the bell, but I have been assured that was simply to get the early samples out the door and won't be there on final release.  It looks like some good accessories will come with this motor as well, though they may change before final release as well.  For now it comes with three very nice flanged nyloc prop nuts, the standard EMAX hex key, and two full sets of motor mount screws. I suggested adding a prop tool to replace the hex key, and adding in extra c-clips for the shafts.  We'll see what makes it into final release. Now on to the results!

These motors blew me away. RPM efficiency exceeded the next closest competitor (Cobra 2204(2205) 2300kv) by an average of 2000 RPMs driving thrust up by a significant margin.  The numbers here were staggering. I've been seeing the hype for these on social media, and they totally lived up to it.  The most amazing number here is 1300g on the King Kong 6x4 at 30A sustained. It is also worth noting this is the first motor I've tested that can really handle the Gemfan 5x4.6 BN prop under static load. Typically you can hear the RMPs reducing and the prop losing momentum due to lack of torque during the run on this prop, the Emax kept it up to speed no problem. The cooling system is really working here, as in free airflow in a static test on the bench at 30A+ the motor only got mildly warm.  Many of the other motors I've been testing got significantly warmer on much less amp draw.  This is also suprising given the fact that the windings in these are 3x0.22mm wire instead of the beefier 2x0.35mm wire in the Cobras, or the even beefier single strand wires in the RotorGeeks and new DYS motors.  As always be sure to click through to the full results at the top of the article.